My top Paris photoshoot locations and other tips for a successful shoot.

I created this post not only for my fellow photography professionals (and amateurs) planning a shoot in Paris but also for my portrait clients who are planning a visit to Paris and are interested in taking themselves on a private tour through the most photographed locations in Paris.

The Trocadero is in the 16ème arrondissement of Paris and is named after the 1823 Battle of Trocadero when the French opposed the Spanish liberals. The Trocadero is one of the most visited areas of Paris, due to its magnificent view of the Eiffel Tower. It’s just the most perfect spot to have your photo taken with the legendary monument. 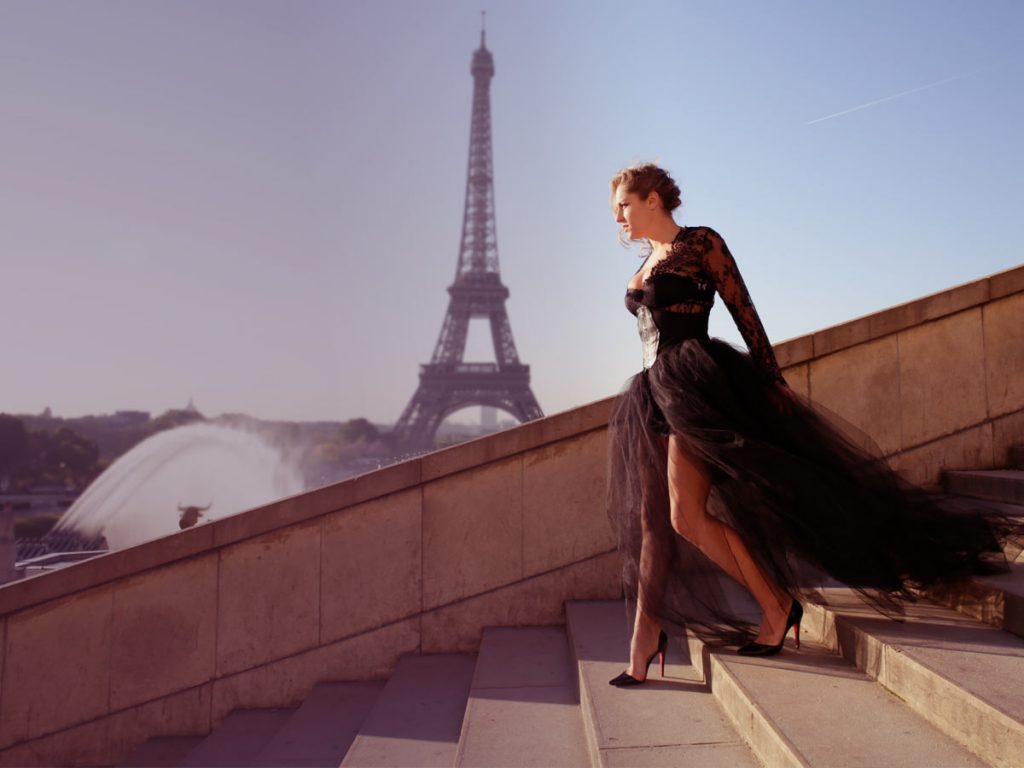 Once you’ve taken in the breathtaking sight of “la dame de fer” on the Trocadero, I recommend you head towards the tower, follow on down the stairs and visit the Les Jardins de Trocadero. You’ll find play equipment for kids, and it is perfect for a romantic stroll especially in Spring when the sakura blossoms are blooming. There is also a truly gorgeous carousel or merry-go-round; fun for both adults who are kids-at-heart as well as children.

Banks of the Seine

Keep making your way towards the tower but just before crossing Pont D’Iéna, I propose you go down on the banks of the Sienne, where you will find a different perspective of the Eiffel Tower, also an amazing spot to take some photos. This is of course not the only great spot on the banks of the Seine; I also love this aspect further down towards the 1st arrondissement and around ile St Louis.

Cross Pont D’Iéna and the Eiffel Tower will be waiting for you with le Jardin du Champs-de-Mars behind it. I recommend you explore the streets leading into the Eiffel Tower from both sides as you will find some of the spots made famous by Social Media influencers.

There are a few food trucks around the Trocadero and gardens, they mostly sell drinks and sweets like crepe and gaufres, there are some sandwiches and possibly hot dogs too. Other than that, if you are hungry try the bistros and brasseries back up on the avenue near the Trocadero Metro or towards Bir Hakeim Metro. You can usually get a decent breakfast or a French onion soup.

Originally a French palace, that became a museum – the biggest in the world – during the French Revolution between 1789 and 1799. The palace features incredible architecture with of course at the center of it, the famous glass pyramid. Depending on the time you visit, it can be crowded so early mornings are the best for photoshoots. A little secret of my own, there’s another court behind the main one which is much less crowded, so it’s great for photoshoots with the grand architecture of the Louvre in the background.

Touching le Louvre is Les Jardins des Tuileries. Les Tuileries is a public park which was originally the gardens of the French monarchs who lived in the Tuileries Palace. Les Tuileries has many photogenic possibilities, my favourite is the classic view of the two rows of trees leading into a vanishing point that brings the eye to the Palais du Louvre in the background.

A recce is a good idea if you wish to shoot here as there’s so many different backgrounds with different vantage points including some spots with the Eiffel Tower in the far off distance.

Cross Rue Rivoli from the Louvre, and you will find the Palais Royal, also an ancient royal palace. It’s popular in the photography scene for its stunning ambient light, the limestone walls look fabulous in photos and work as a natural reflector. Les colonnes de Buren is an artwork located in the inner court of the palace, great to take fun photos with kids.

Word of warning, Les Tuileries and Jardins de Luxembourg are the only locations where I have been asked to leave as a professional shoot was not permitted without authorisation. I have also been asked to stop looking so professional at Palais Royal 🙂 I had set up a tripod to attach a reflector and the polite security said that this type of equipment was not permitted.

What time of year is the best for a Paris photoshoot?

One word: Spring. The weather is always so fickle but Spring is my favourite time of year in Paris.

What if it rains? Here is an alternative photoshoot location that still features the Paris icons.

The threat of rain is only too real however unless it really is bucketing down, I will always go ahead with my planned photoshoot. A really nice umbrella as an accessory can be a cute addition to a shoot. I have one in clear plastic which matches all outfits and a lovely big red one too.

I allow a little more time when the weather is being temperamental as that gives us the option to pop into a cafe or brasserie to wait out the showers and warm up. Photos in cafes can also be a cool addition to your photo shoot! 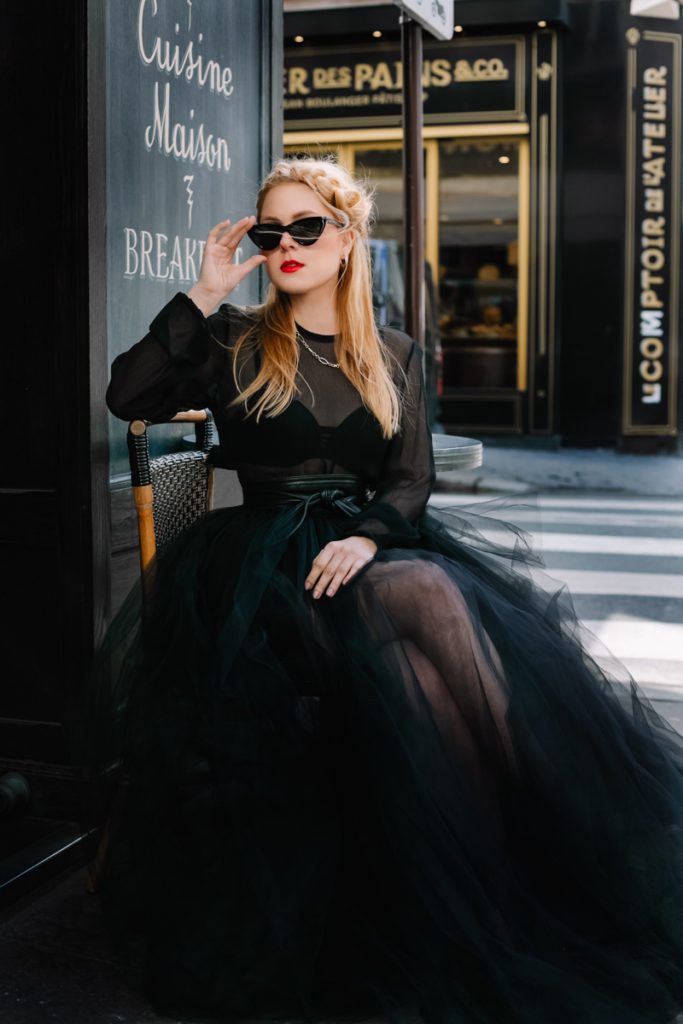 The Bir Hakeim bridge is probably the best place to shoot the Eiffel Tower if it is raining in Paris on the day of your photoshoot. The bridge provides cover and the Eiffel Tower still makes an appearance in the distance. If there is a break in the rain, the balcony over the river offers another angle with the typical Parisian residential architecture also appearing in the background.

Am I going to look or feel silly?

Paris is so used to professional photoshoots. Bloggers and social influencers are EVERYWHERE. Parisians don’t take its reputation as one of the most beautiful cities in the world for granted and locals often stop to enjoy my clients in their beautiful gowns… especially in the lesser common spots like on Ave de Camoens. As for tourists, I can see them wondering if my client isn’t some kind of celebrity 🙂 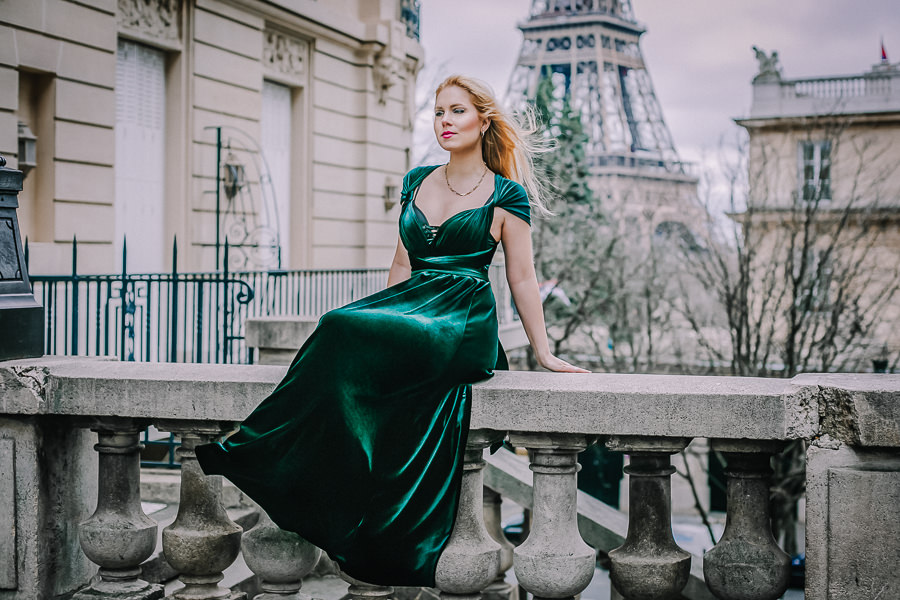 Are you coming to Paris and thinking of booking your own photoshoot? I would love to help you make that thought a reality!

Me, when my client suggests we go for cake after o

Life is beautiful... especially on a Friday! ~ fro

Welcome Confinement 3 #Paris Not as tough as the p

Boudoir Photography has become a way for women to

Recently someone messaged me asking if I also phot

Happy Valentines Day, bitches 😈💋🖤 with Do

What is the seal of liberation? - To no longer be

Just another one of my lovely personal brandings c

My last personal branding shoot for 2020 with Mayg